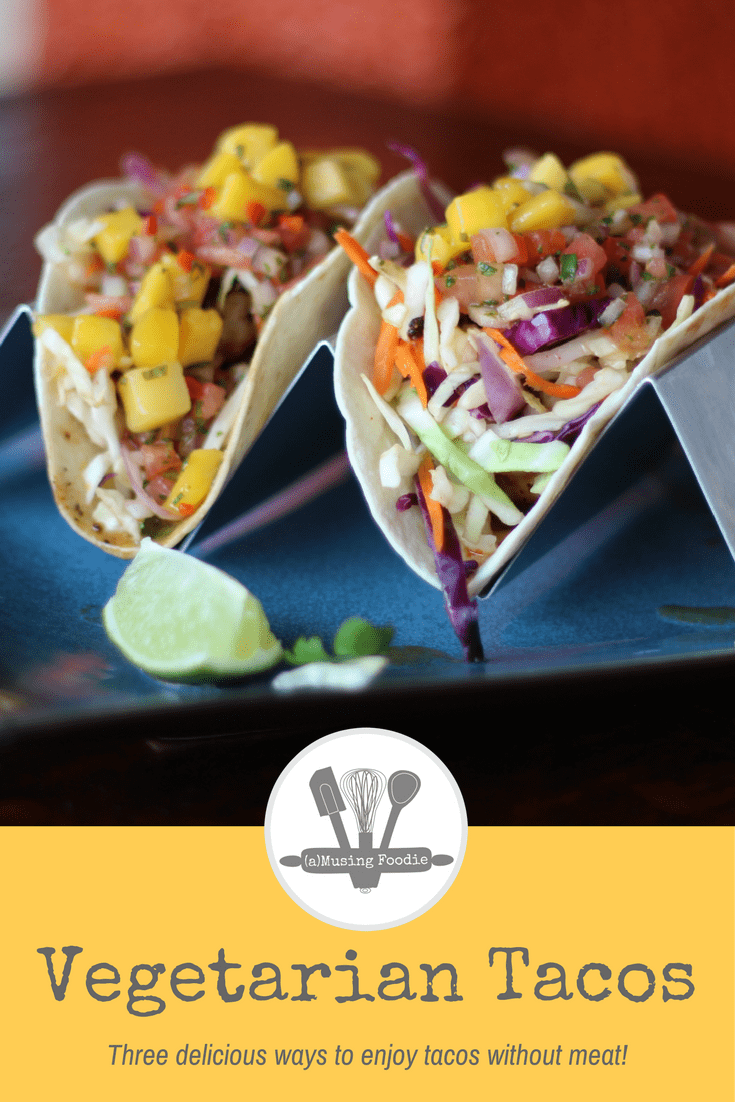 My sister became a vegetarian nearly a decade ago and ever since the switch she’s still craved random and delicious foods from her previous life as an omnivore. Things like the crispy skin on fried chicken. Or steamed Maryland blue crabs. Or an ooey-gooey cheeseburger.

While there are decent ways of cobbling together a meatless version of fried chicken (battered and fried…something) or cheeseburgers (veggie patties have improved in recent years!) those are never really the same as the real deal. And crabs? Well, Old Bay on other things helps soothe the craving…but…nope. Not the same.

Tacos, on the other hand, are well-equipped to stand up to, and shine in, a meatless challenge! And, let’s be honest, there’s no good substitute for fried chicken or bacon or cheeseburgers.

Except maybe the ‘Shroom Burger from Shake Shack—O.M.G. Let’s take a second, shall we?

Talk about a versatile “fast food.” In the years my sister lived next door to us, we spent a lot of time cooking together. It was then that she made the transition to being vegetarian, and as any foodie would understand, it was quite an upset to our normal way of enjoying food.

Despite a deep love for refried beans, we challenged ourselves to make great vegetarian tacos that didn’t involve them. Something that feels “meaty” in texture, but not with a weird texture. **shudder**

Our first foray into vegetarian tacos was successful using canned Great Northern Beans in place of meat. There was absolutely nothing fancy about them—beans sautéed in a large skillet with standard taco seasoning spices, served with the usual lettuce, tomato, green onion, cheese, sour cream, etc., toppings. That first recipe was simple and delicious, and works equally as well with canned black beans or other beans. You can also use dried beans—just be sure to allow enough time to soak and cook them.

Fast forward a decade and my sister and brother-in-law have discovered other yummy ways to enjoy vegetarian tacos. A favorite of theirs is lentil tacos served in a soft corn tortilla. The dried lentils in water, along with chipoltes in adobo, lots of lime juice, and cumin, are boiled for 25 minutes or till tender. USE LOTS OF LIME JUICE. They’re served with shredded arugula or spinach, cotija cheese and limes.

Too much fake meat can be both dull and expensive. That said, there’s a time and a place, and replacements have become a long way since the days of only having Boca Burgers at the grocery store. One of my sister’s go-tos is Fieldroast Mexican Chipotle sausages and she uses them like chorizo, crumbled and sauteed alone as a base for beans. Like taco meat. Then, you can top them with a corn salsa slaw and some crème fraîsche, you’ll start drooling before they even hit your mouth!

Note: if you have someone who’s adverse to a meal without meat give  an easy solution is to sear shrimp with salt and pepper and serve them on the side.