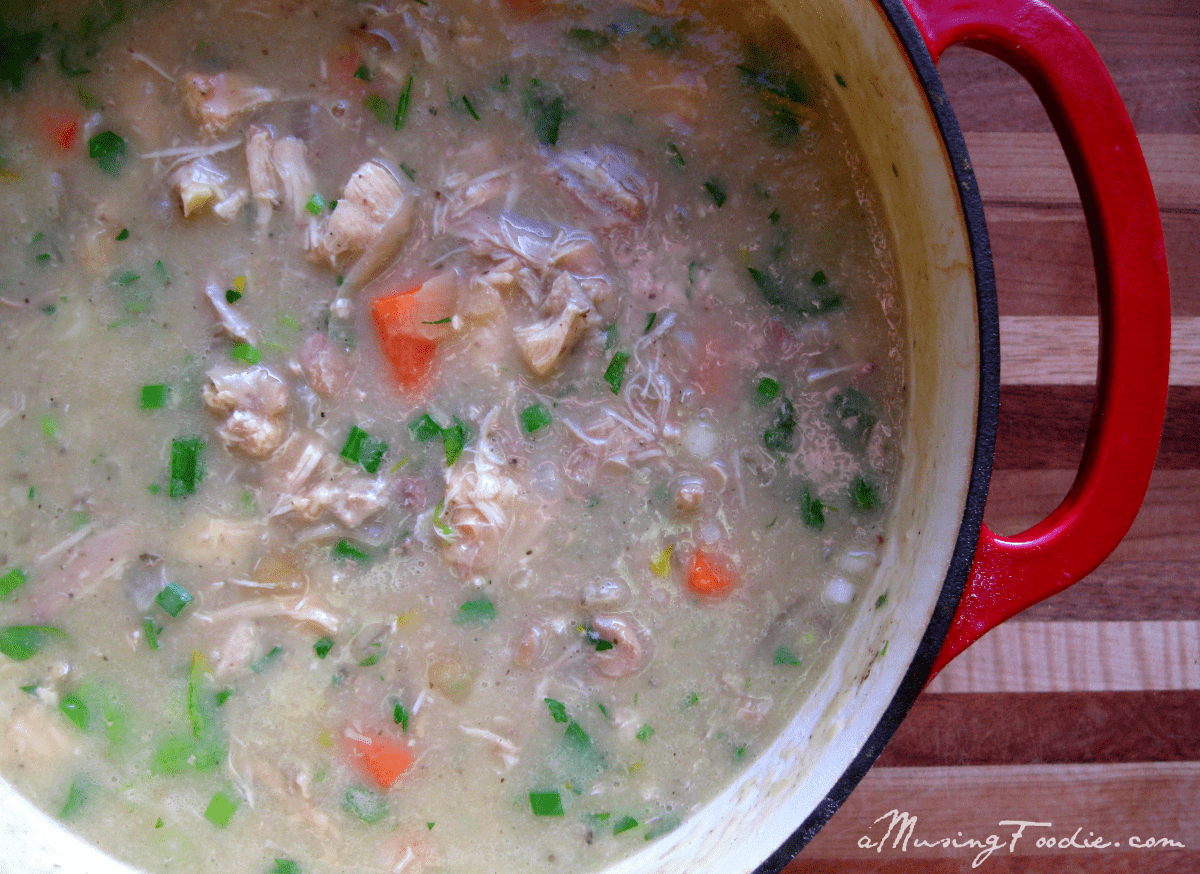 A take on Ina Garten’s chicken stew, started in the slow cooker and then finished in a Dutch oven. Delish! It’s the new year, and I have a few goals to accomplish — none of which are impossible, nor difficult. I’m going to grow a container garden, try making more foods by hand (like cheese), and get back to exercising. 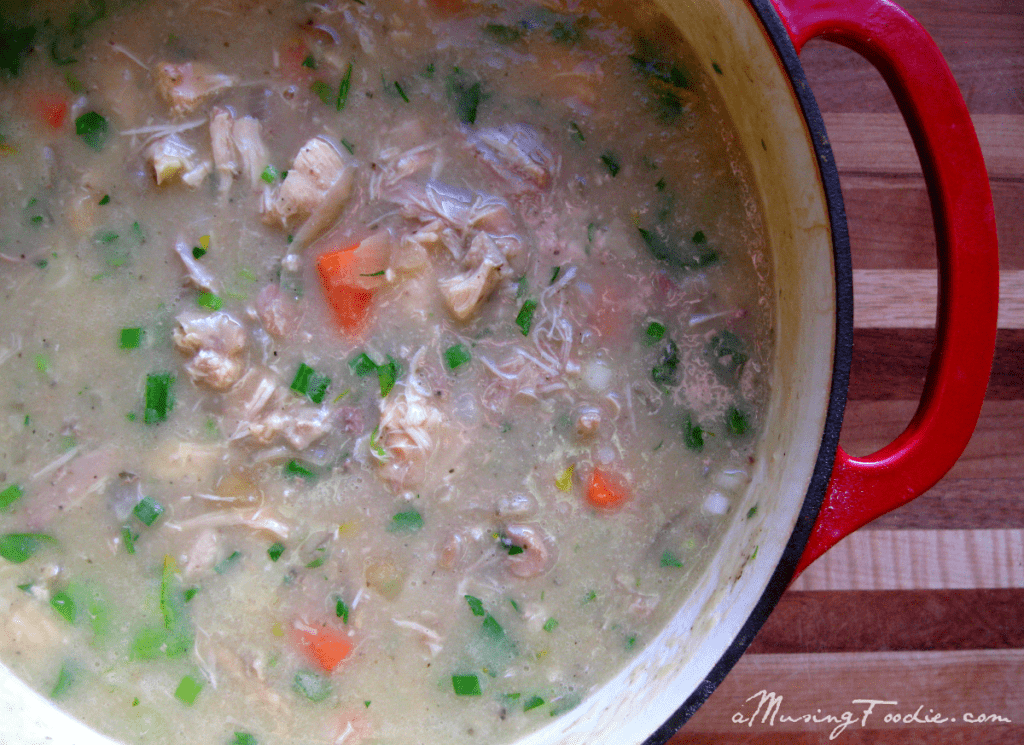 I’ve found the hardest part about getting started is, well, starting. I was all set to hit the pavement with my iPhone and C25K app this weekend (yes, starting back at the beginning with W1D1), but then we had some snow blow in, followed by an ice storm.

Ice and snow make it not so easy to hit the pavement.

I even told two friends I wished I had a “dread” mill, even though most runners hate them. While I prefer running outside in my neighborhood, or in downtown Frederick, I would love the ability to run indoors on a treadmill if the weather wasn’t cooperating.

I’m saving my pennies; one day I’ll have a treadmill. Mark my words.

Running is my favorite exercise. I love the simplicity of it. Shoes, running clothes and music. No gym membership, no classes — just the streets.

But since I couldn’t get out and start running, I decided to cook an all-day meal. That’s a logical alternative, right?

(Cut me some slack.)

A foodie friend of mine and fellow Ina Garten fan was talking the other day about a recipe he tried from Ina’s arsenal.

“Tell me you’ve tried Ina’s chicken stew with biscuits. You HAVE to try her chicken stew.”

It doesn’t take much convincing for me to try a new recipe, especially from a friend who loves food and cooking as much as I do. I looked it up, and sure enough I had most of the ingredients on hand already.

But, being that it was a Saturday, and we had absolutely nothing to do (which included me not running), I decided to make a tweak. 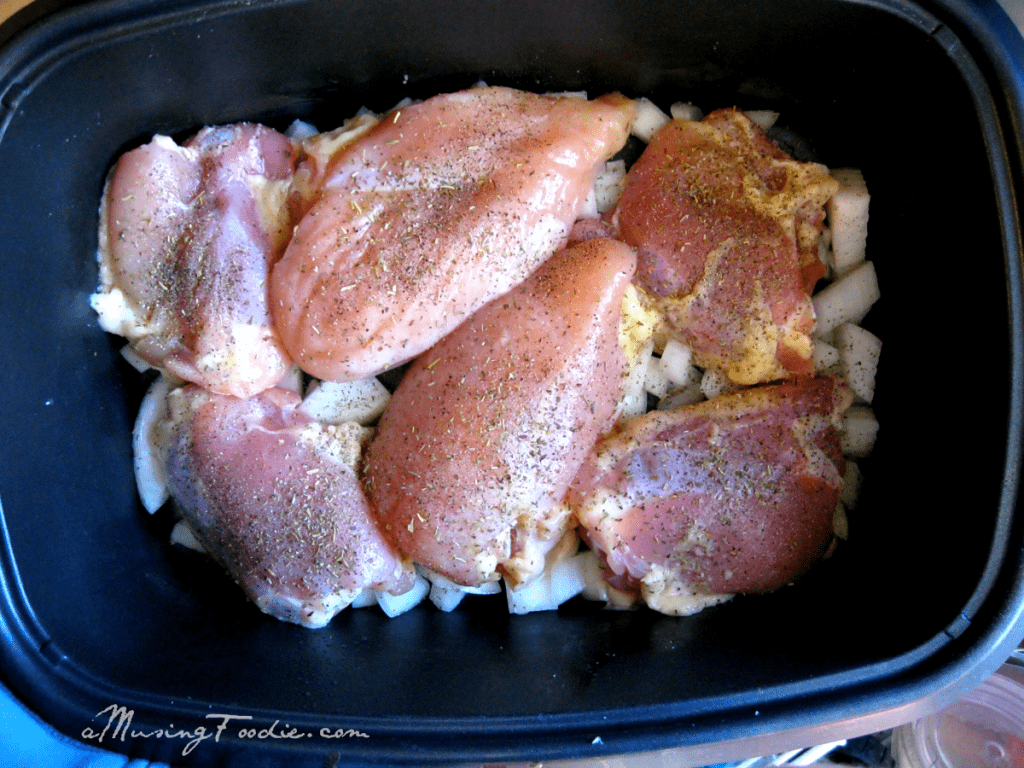 Not all ideas are perfect.

Good news is, I enjoy a challenge.

After four hours in the slow cooker on high, the chicken came out tender and falling off the bone. THAT was what I intended.

It probably would work just as well in an Instant Pot for a fraction of the time, too. 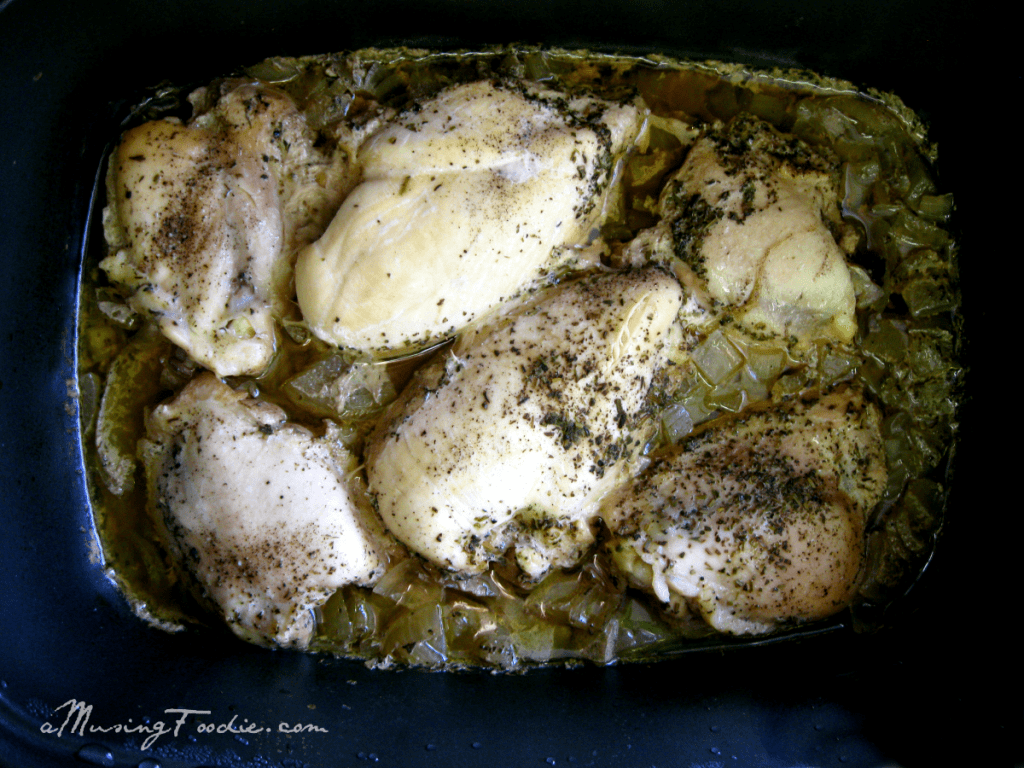 I used the chicken I had in my freezer, which ended up being two boneless, skinless chicken breasts and four bone-in chicken thighs. I also used two cups of my overnight slow cooker chicken stock and two diced onions.

All of this simmered together for four hours; the scent throughout the house was knock-you-over good.

Even though the chicken practically fell apart from tenderness, I was still able to roughly dice it into large chunks. 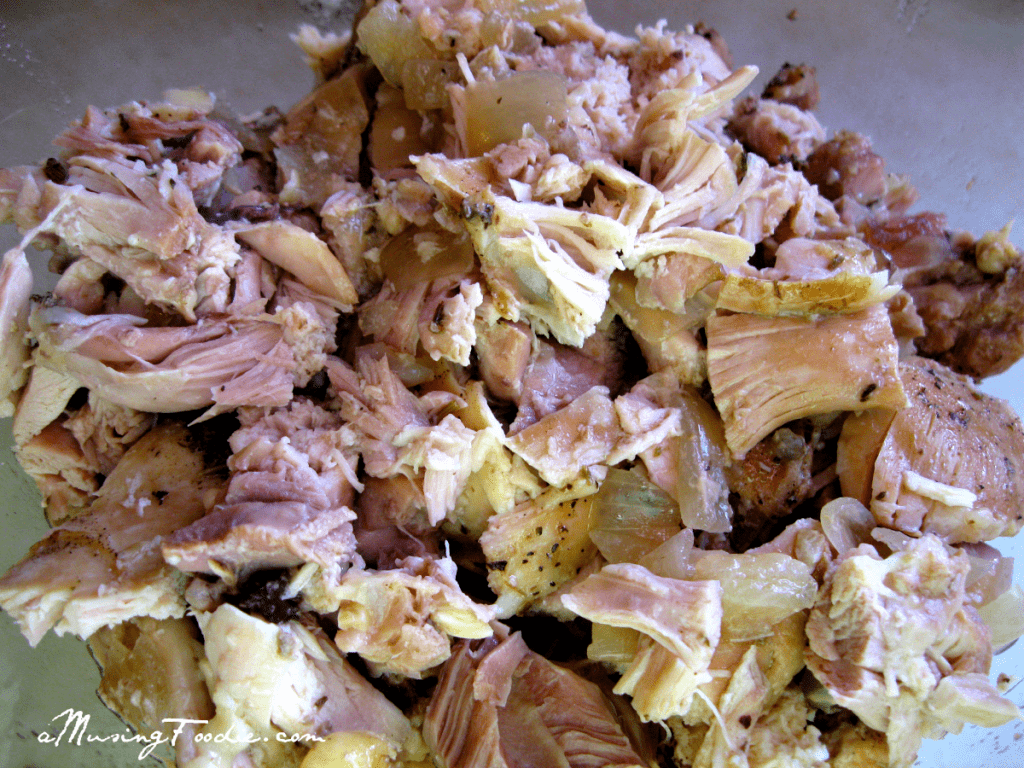 Then I had to stop.

The problem was that Ina’s recipe called for a bechamel base to the stew that is then incorporated with more chicken stock and followed by being baked in the oven with homemade biscuits on top.

I don’t claim to be a wiz with my slow cooker. I’m a hair more than mediocre, I’d say. I’m an *average* slow cooker user.

I couldn’t decide how in the world to translate the next steps of the recipe into something equally delicious cooked anywhere but stove-top and in the oven.

So I bailed on my slow cooker, and I brought out my trusty dutch oven.

I let the stew simmer for a while on the stove, and boy did it smell good. I loved the colors in Ina’s chicken stew, but my husband hates peas in any type of stew or soup (or really in anything ever), so instead I used some green onions I had in the fridge. This actually worked out well because I didn’t have pearl onions like Ina uses in her recipe.

I love it when a plan comes together.

Then there’s the cream. I love cream. I prefer cream in recipes when it’s called for. I didn’t have cream on hand, so my chicken stew uses whole milk. I want to reiterate that I would have used cream if I’d have had it on hand.

I’m not one to skimp on the milk fat, people!

The last step was to pour the chicken stew into a baking dish, and then after about 15 minutes in the oven, top it with homemade biscuits that cook right on top. 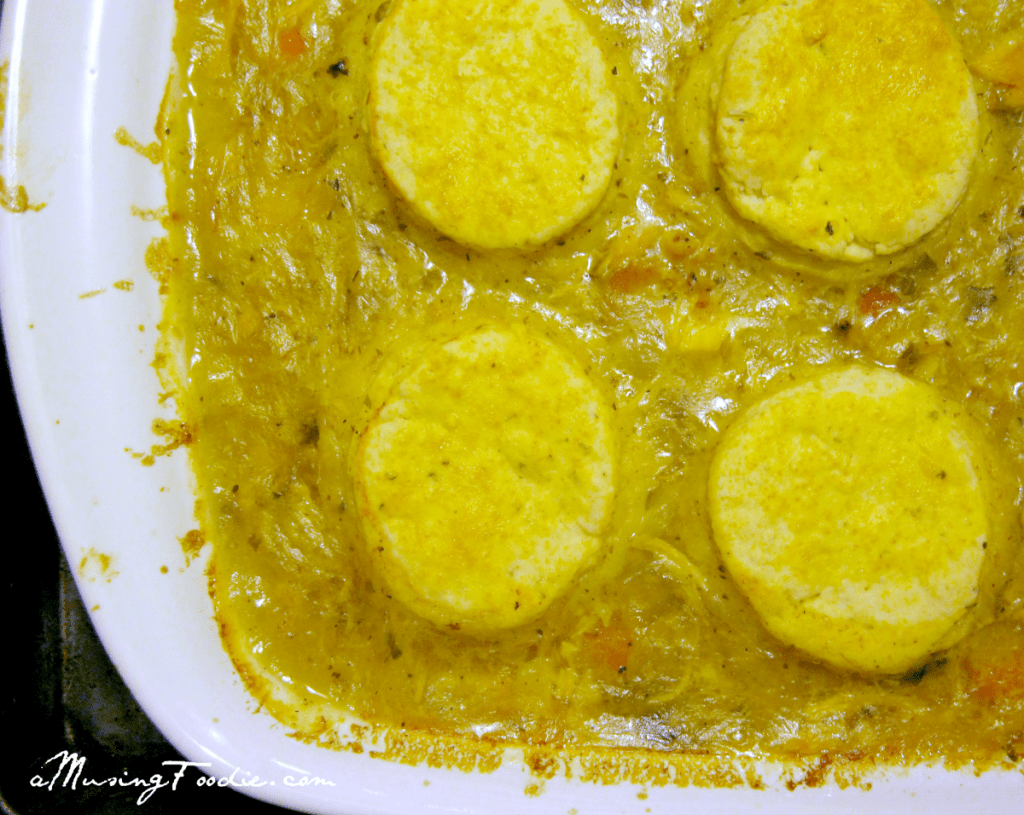 No. I didn’t use saffron in the recipe. The yellow is the horrid look of a picture that I’ve tried to correct after taking the photo at night without proper studio lighting. I’m embarrassed to be sharing it. Close your eyes and pretend it’s actually been taken with beautiful natural light? Thanks.

The flavor though? UH-may-zing. Just what you’d expect from lots of butter, whole milk, chicken that’s been slowly cooked all day. I could go on.

The leftovers will be devoured this week at work.

I think it’s time for a jog. 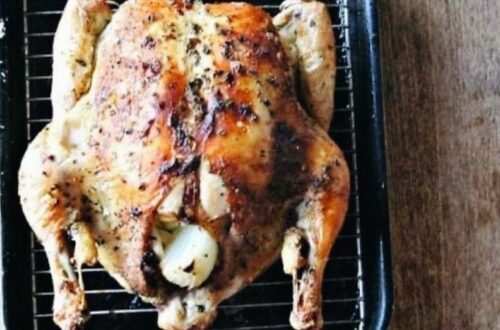 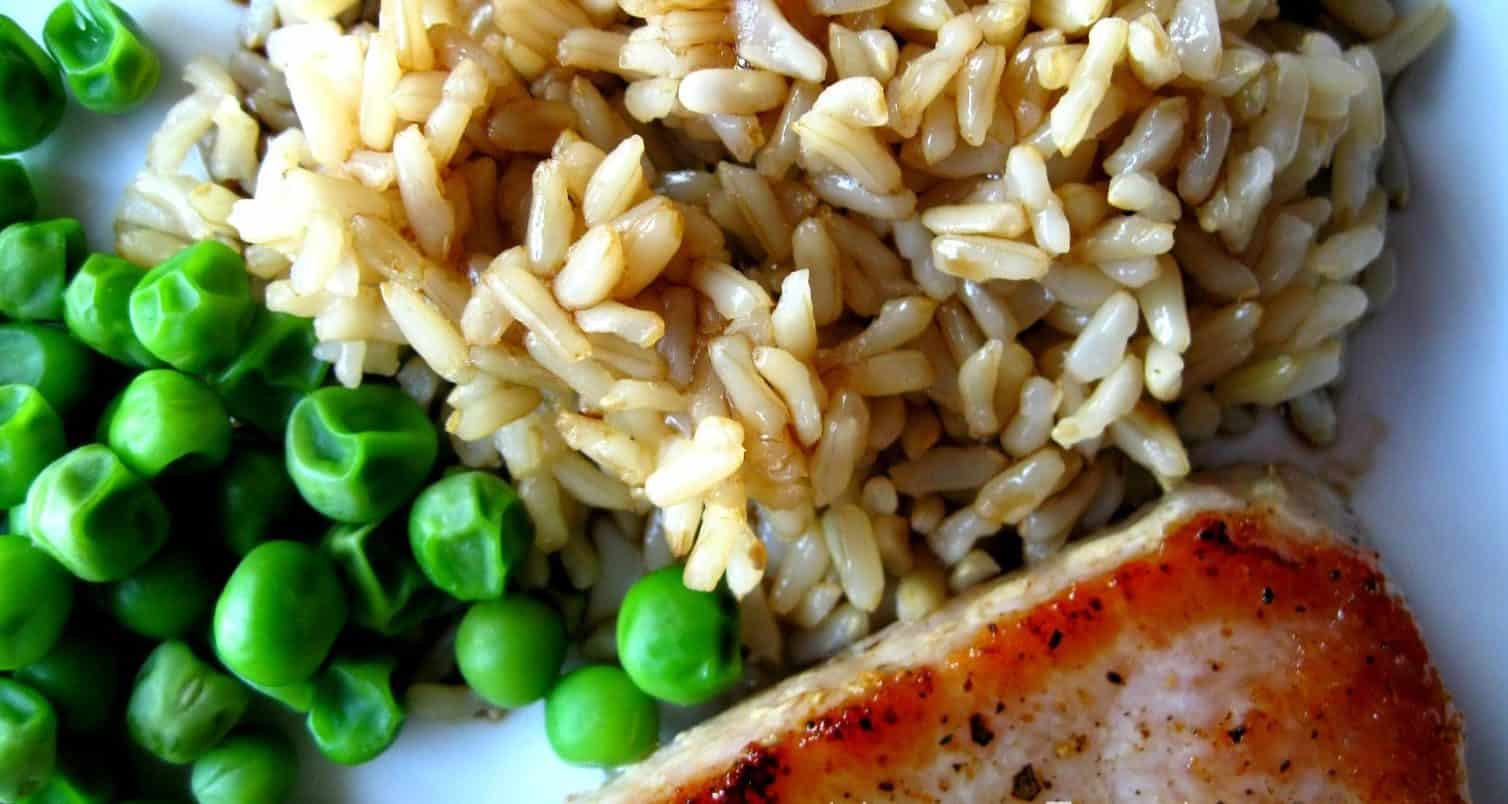 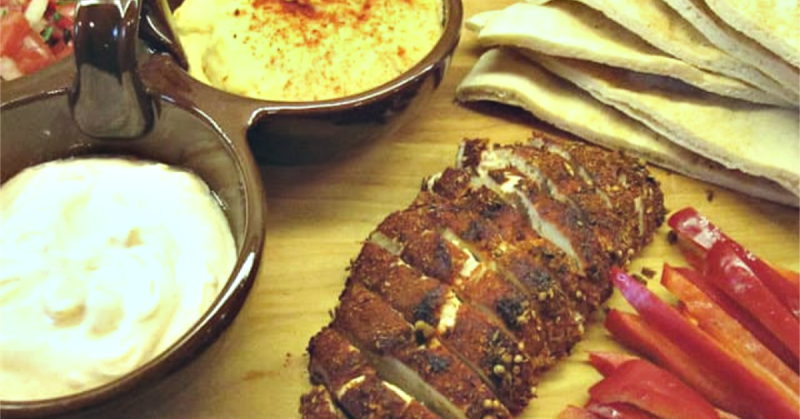