0shares
What do Aquaman, Naked Sushi Girl, and tons of food have in common? Why, they were all part of the Kona Grill VIP party in Baltimore last night, of course. 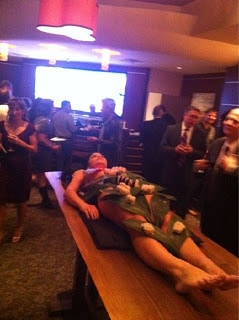 That’s right. Last week I was the lucky recipient of a VIP invite to the pre-opening bash at Kona Grill in Baltimore, Maryland. With over a dozen locations in a variety of cool cities, including Las Vegas, I expected good food and a buzzing atmosphere, and last night proved to be both those things with an added splash of whimsy (Aquaman and Naked Sushi Girl), friendly chatter (me, Jessica, Jodi, and Janine), and goofiness (me, Jessica, and our husbands).
I’m sure you’re wondering what the heck Aquaman and Naked Sushi Girl are. I would be, and in hindsight I wish I had taken more photos because I’m not sure I can do them justice. Aquaman was a guy painted ala Blue Man Group that was standing inside a round table. He was surrounded by oyster shooters and sea urchin & quail egg shooters – and he was interactive, handing you your selection. Naked Sushi Girl, on the other hand was just that. A girl with precisely placed banana leaves covering all her important bits, with sushi all over – as though she was a serving tray.

What was the food like you ask? I’ll tell you: distinctly delectable. Distinct in that the menu ranges from burger sliders to sushi, and delectable in that EVERYTHING, and I mean every…last…bite was mouth-watering. I must have tried a dozen different tapas-sized treats last night. Ultimately my favorites were the steak and truffle flat bread, the macadamia nut chicken with shoyu cream sauce & pineapple-papaya marmalade, the potstickers, and the array of desserts: passion fruit creme brulee, key lime pie, and ultimate fudge brownie (served warm) – little bites of decadent sweetness on a spoon.

Oh – and I sampled one of their three featured cocktails, the strawberry basil lemonade. Ummm…I’m not typically a mixed drink girl, usually I stick to my go-to glass of pinot grigio, but this concoction was so good I’d probably order it over my wine next time. The basil added a slightly minty note to the sweetness in the lemonade, which for someone like me that doesn’t like syrupy mixed drinks, was perfect.
It’s worth a trip back, and I know my husband feels the same (he ate his body weight in sushi, it was so good). And, I’m anxious to return when the party vibe is a little lower – for an opening event it was cool and expected;  the atmosphere definitely made the night feel special. But, it will be nice to really savor the menu over great conversation without the DJ and the loud music. I’m a fan!
Kona Grill opens on October 4, 2010 at 1 East Pratt Street in Baltimore, Maryland.
0shares